Only a short while ago Jamie Buchanan aka 78Edits was someone you probably hadn't heard of, although he has been producing and DJing for the last 15 years, an asset that can be heard in the elegance of his tunes. Over the last 12 months or so he has been dominating the ever growing slow-mo disco scene with some great tracks behind his name like "When I'm With You" and many more to come out on labels such as Kolour, Editorial and Audio Parallax.

You’ve been involved in the house music scene for quite some time now, DJing on and off for 15 years. Were you also producing in this time or is it something that slowly caught on?

I’ve been making my own tracks and messing about with synths and samplers on and off for about ten years but its only in the past year or so that I decided to really concentrate on producing and put the results on soundcloud and it’s all just kind of taken off from there.

How do you feel your DJ style and productions have evolved over the years?

I’d say that tempo is probably the main difference.  The bpms have definitely dropped as I’ve got older and the ‘genre’ is different, but the feel of my sets and productions have pretty much stayed the same. I like to play and make deeper stuff as well as disco/edits and in the past it was more soulful, vocally house I was into

You gave DJing a break for a short while but then got back into it. Where do see yourself now as a DJ?

Ha, good question. I’m definitely getting more interest and gigs now than I was before I took a break. It’s amazing what having a record released can do for your reputation. It’s funny though, for a long time I saw myself as a DJ first and ‘producer’ second but could never get past playing a few local bar gigs whereas now I definitely concentrate more on producing but the DJing is taking off more now than ever. My DJ style has never really changed that much over the years either, I like to just get from track to track with a minimum of fuss and  let the music do the talking.

Seems like Soundcloud has really helped you kick things off, is that how you got in contact with the labels Editorial and Kolour Records?

Both labels contacted me out of the blue through hearing my stuff on Soundcloud which was amazing as they are two of my favourite labels at the moment. The Editorial release is a sampler with tracks from a few different artists and is coming out at the end of May. I’m really excited about the Kolour release as well as it is going to be on the  Kolour LTD label and will be pressed on coloured vinyl with other tracks from Deadly Sins, The Glue and Zoo Look. They had initially signed my track ‘when I’m with you’ for the next ‘House is the Cure’ release which would have been cool as all the profits from those goes to charity but they ran into some delays with it so they very kindly moved it over to Kolour LTD.

Tell us about you upcoming release on the fantastic Audio Parallax Rec and the Giant Cuts release.

Yeah, another two amazing labels. I’ve got two digital EPs out at the moment on Giant Cuts and the debut vinyl release on its offshoot Original Cuts that have all been doing pretty well. David James who runs the label is a really good guy and has been really supportive of me. Audio Parallax was actually the first label that picked up on my tracks back in February although the EP isn’t due out until July, but it’s great to be involved with a new label that’s putting out such amazing music.

What inspires your infectious slow disco sound and what does you current studio withhold?

The whole slomo/disco edit scene is just something that has really struck a chord with me. I’ve always been into and played the more laid-back house stuff along with Disco and Soul  so it’s just ideal for me. I know edits can get a bit of a bad press but there wouldn’t be a scene if people weren’t into it. I think the majority of it is pretty amazing and can introduce people to the original tracks they maybe wouldn’t  heard of  (it’s happened to me countless times) and as long as people are being creative then I don’t see what the problem is. At the moment my ‘studio’ (corner of my living room) consists of a PC, Ableton and a USB keyboard. It sounds really basic but it’s really all  I need and actually helps me be more productive.  I used to get really bogged down in messing about with masses of different plug-ins and programs rather than actually finishing anything so limiting myself to a very basic set-up really works for me. 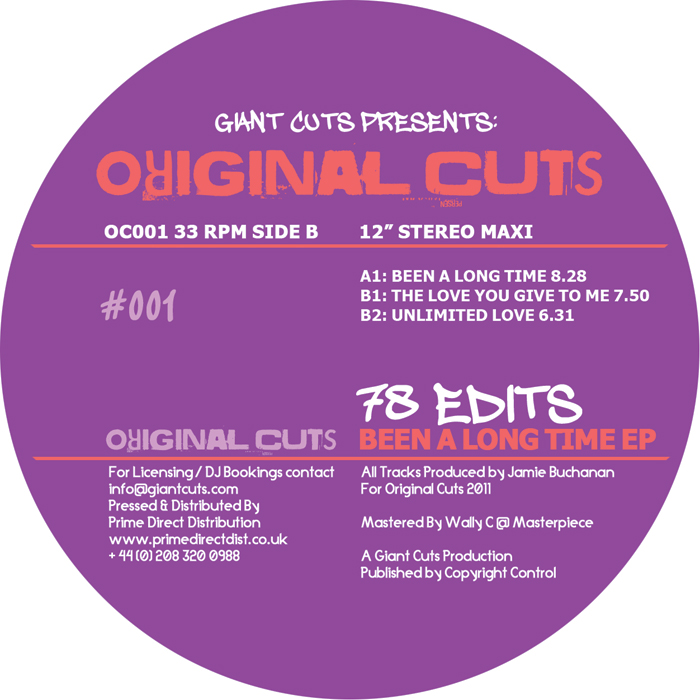 What is the current scene like over in Edinburgh?

It seems pretty healthy at the moment. I don’t go to clubs as much as I used to but there are good nights that cater for the slomo/ edit sound. Craig Smith has a monthly night called Heavy Gossip that’s really good and has had some amazing guest DJs.  Bars in Edinburgh have always been great at putting on decent  DJs  so you can always find somewhere playing quality music. As for producers, apart from Craig Smith, there is a producer called  Dbo who has an EP coming out on Audio Parallax and another guy called B-Jam who’s doing some amazing stuff right now.

‘I’ll Be True To You’ which is on my latest digital EP for Giant Cuts is going to be released on a limited edition 7inch vinyl alongside a track from Deadly Sins. I’ve also hopefully  got another couple of vinyl releases coming out later in the year on two new labels.  As for DJin I’ve recently hooked up with well know Edinburgh DJ, Lel Palfrey,  who has got me playing out and about again.  I’ll also be DJing at a night called ‘Big in Japan’ in London on July 29th which I’m really looking forward to as it will be my first big gig outside Edinburgh.

Tell us about the mix you have put together for us.

It’s a just over an hour slomo mixture of some deep stuff, some edits, a couple of exclusives and a little bit of shameless self-promotion on my part. I really hope people enjoy listening to it, I definitely had fun putting it together.